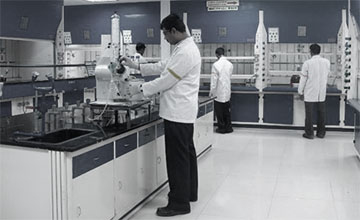 Minoxidil was developed in the late 1950s by the Upjohn Company (later became part of Pfizer) to treat ulcers. In trials using dogs, the compound did not cure ulcers, but proved to be a powerful vasodilator. Upjohn synthesized over 200 variations of the compound, including the one it developed in 1963 and named minoxidil. These studies resulted in FDA approving minoxidil (with the trade name Loniten) in the form of oral tablets to treat high blood pressure in 1979.

When Upjohn received permission from the FDA to test the new drug as medicine for hypertension they approached Charles A. Chidsey MD, Associate Professor of Medicine at the University of Colorado School of Medicine. He conducted two studies, the second study showing unexpected hair growth. Puzzled by this side-effect, Chidsey consulted Guinter Kahn and discussed the possibility of using minoxidil for treating hair loss.

Kahn along with his colleague Paul J. Grant MD obtained a certain amount of the drug and conducted their own research, apparently without notifying Upjohn or Chidsey. The two doctors had been experimenting with a 1% solution of minoxidil mixed with several alcohol-based liquids. They tried to patent the drug for hair loss prevention, but found that Upjohn had already done this. A decade-long trial between Kahn and Upjohn ended with Kahn’s name included in a consolidated patent  in 1986 and royalties from the company to both Kahn and Grant.

Meanwhile the effect of minoxidil on hair loss prevention was so clear that in the 1980s physicians were prescribing Loniten off-label to their balding patients.

In December 1985, Upjohn submitted to the Food and Drug Administration a study on the treatment of over 1800 patients from baldness with a two percent solution of minoxidil in various US dermatological clinics. In April 1986, the results of this study were made public.

In August 18, 1988 the FDA finally approved the drug for treating baldness in men under the trade name ‘Rogaine’ (FDA rejected Upjohn’s first choice, Regain, as misleading). The agency concluded that although “the product will not work for everyone”, 39 percent of the men studied had “moderate to dense hair growth on the crown of the head”.

In 1991 Upjohn made the product available for women.

On February 12, 1996 FDA approved both the over-the-counter sale of the drug and the production of generic formulations of minoxidil. Upjohn replied to that by lowering prices to half the price of the prescription drug and by releasing a prescription 5% formula of Rogaine in 1997.

In 1998 a 5% formulation of minoxidil was approved for nonprescription sale by the FDA.

As of 2014 it was the only topical product that is FDA-approved for androgenic hair loss.

The drug is available over the counter in the United Kingdom and Germany.

A study conducted in 1999 showed that minoxidil results in a darkening of the hair on the patient’s body, increased hair growth, and in some cases a considerable growth of hair was observed. After discontinuation of the drug, hair loss was resumed and the condition of the hair was returned to the baseline before treatment for a period of 30 to 60 days.

In 2006, Johnson & Johnson, which acquired the Rogaine brand from Pfizer, introduced a minoxidil for men in the form of a foam that “proved to be much more popular than a traditional liquid solution.” Also, a study published in 2007 in the Journal of the American Academy of Dermatology found that foam, unlike a liquid, does not contain propylene glycol, which often causes irritation and can lead to allergic dermatitis.

In 2015, Johnson & Johnson introduced a five percent minoxidil for women in the form of mousse, which should be applied to the hair not twice a day, but one.